< Go Back to Natural Resources Page 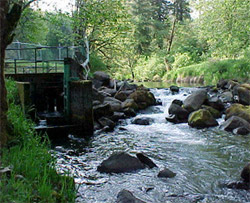 We have explored new and innovative ways of rearing young coho salmon that contribute to traditional tribal fishing harvest in Rock Creek. Many more coho salmon have been available to tribal members the past few years than during the prior decade. Our fish are surviving significantly better than traditional hatchery fish so we can do a lot more with a lot less money. We have a long way to go in providing optimal opportunities for quality fish but we are continually experimenting and learning more.

We allow fry to swim into our ponds as they move down stream in the Rock Creek system. The fry rear in our ponds without being fed and we keep brush in the ponds for cover. This makes for less stress for the fish and protects them from predators. We place wood chips in the ponds twice a year and bacteria and fungi break down the wood chips. Nutrients are released and algae grows on the nutrients. Bugs eat the algae. Fish eat the bugs. This creates a simple, natural process. We also place carcasses (dead fish) in the ponds in the fall. The carcasses slowly rot during the winter and the juveniles feed on the rotting flesh. Our goal is to grow 10,000 smolts total per year in the future.

The objective of the Oyster Project is to determine what methods can be used to restore native oysters in Oregon estuaries. This project is focusing on restoring native populations that will be self-sustaining. That is, we need to get enough out there, in the right places, with the right habitats available, so they can reproduce on their own. This will be a significant job. The estuary has changed so much in the last 150 years that we may not be able to accomplish natural reproduction at the levels we are hoping for. The annual process involves spawning adult oysters in a hatchery and letting the babies attach to shell from harvested oysters. We then hang that shell from docks in the bay for a few months while the babies feed on plankton. We check the growth and survival by fall. Those that survive are then moved to ropes and placed at new sites in the bay where they are monitored for several months.

Over the past several years the Tribe has monitored several salt marsh channel systems in the Millport area of the Siletz River estuary just North of Salishan Resort near Lincoln City, Oregon. This data will prove valuable to a host of restoration and management agencies currently involved in salt marsh restoration. It is very uncommon for restoration funding agencies to provide dollars for monitoring those sites that have been restored. This makes it difficult for practitioners to know the “real” responses to their restoration efforts. In the case of the Millport marsh, we expect to have statistically sound numbers comparing the response of aquatic organisms, plant communities, soil elevations, water temperatures, salinities and tidal cycles after restoration in comparison to pre-restoration. This will help practitioners better understand how effective we were in meeting our goals as well as how to best utilize future restoration dollars.

Staff, tribal volunteers and community volunteers collect eels at Willamette Falls on the Willamette River near Portland, Oregon a few times each year during the spring months. This is a traditional harvest of the Siletz people that used to mainly occur on the Siletz River, before our local runs became so low and even non-existent in some traditional areas. We have spent several tens of thousands of dollars working with dam re-licensing projects on the Willamette River which have in large part focused on getting agencies to pay more attention to lamprey issues the Tribe is concerned about. 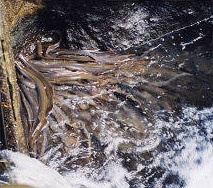 We are trying to assist ODFW in fixing the ladder so that we get good passage of eels at the Siletz Gorge falls site. It is unclear how bad passage is and that is why we are going to radio tag fish and monitor their movement. The radio tagging involves capturing an eel, placing a radio transmitter inside it (surgically), then tracking it for a few months to see if it can get over the falls and around the ladder or whether it has to go through the ladder and gets stuck.

Tribal Staff work with various agencies throughout the Northwest on environmental issues including working on the relicensing of Hydro Projects. A great deal of effort is spent working with other tribes on the Portland Harbor Superfund Site which includes an 11 mile strip of land along the Willamette River in the Portland, Oregon industrial area.